Johnette Napolitano is one of my musical idols, so getting to talk to her in 2002 when her band Concrete Blonde had reformed and were coming to Australia was an absolute thrill.

“I’m sitting at home drinking tequila talking to Australia – it doesn’t get much better than this,” says Concrete Blonde lead singer Johnette Napolitano from her home in Hollywood.

Her band has reformed, they’re touring to sellout gigs around the US, she’s comfy in her skin … you can see where she’s coming from.

“It’s a miracle we’re all still alive and able to do this. We’ve all had our shit,” she says of the reunion. “If you’d asked me if this would be happening back in May last year, I would have said `no way’. Now I’m really looking forward to the future. One thing someone said to me a long time ago was that the future takes care of itself.”

Harry’s out, Gabriel’s in

Not even the loss of drummer Harry Rushakoff has shaken her confidence in the band’s resurrection after an eight-year absence.

“Harry’s in jail,” she says. “We knew it was going to happen sometime, but nothing’s going to stop us from playing.”

“Gabriel is a great guy and a scary-ass drummer. Jim and I have produced Maria Fatal so it wasn’t a matter of who, it was just a matter if he would say yes.

“He’s from Mexico City, he’s kicking our asses into making a new record. I need to be making it for a reason, I don’t want to do what I just did, I want a musical statement, something to say.

“You’ve got to push up a level, to grow artistically. We’ve been asking ourselves, ‘What do you think? Where do we fit in? What do we do?’ We are who we are. You don’t just jump on a trend. That’s embarrassing.

“Gabriel is a huge breath of fresh air, getting us to try our old stuff. It’s all new to him. Jim and I have reached all the way back.”

That `old stuff’ harks back to 1982, when the band landed a record contract and changed their name from Dream 6 to Concrete Blonde (at the suggestion of then labelmate Michael Stipe, of REM). They released five albums, scoring their first gold in Australia with Bloodletting powered by the single Joey.

“I can still remember (Mushroom records supremo) Michael Gudinski in the water taxi on Sydney Harbour,” Napolitano says with a throaty chuckle. “Mushroom worked hard for us, harder than anyone at the time. Your first gold is a special moment.”

Concrete Blonde called it quits in 1994 with Mexican Moon.

Napolitano has had plenty on her plate since, including touring with The Heads, an album with Holly Vincent, her own band Pretty & Twisted, a joint album with Mankey and Los Illegals, an unreleased solo album and furthering her art career. Then last year, the wheels fell off.

“I was flipping out in May 2001. I had this paralysing sense of fear, doom, death, bombs dropping. There were a few friends I could trust who wouldn’t think I was insane. I found myself knocking on Jim’s door at three in the morning with a Bible in my hand. I knew something bad was gonna happen.

“He got me to a shrink and she said there’s some things we can’t explain, and I respect her for that. I’ve seen it myself.”

Once she had caught up with Mankey, it seemed right to also contact Rushakoff.

“We got Harry out of rehab and had lunch. There wasn’t a big distance between having lunch and picking up our instruments and playing.

“We just started to jam.”

The resultant album, the aptly titled Group Therapy, was recorded in 10 days in August.

“It all happened very fast, we hadn’t planned it, we didn’t have a label. We had no high expectations, we were just happy to play.

“We’d produced an album for Maria Fatal in 10 days. I loved the energy, of being on the edge, a knife to the back sort of feeling. I don’t know if the engineers liked it.”

The terrorist attack on the US in September fulfilled Napolitano’s premonitions, as reflected in Group Therapy’s most aggressive track, Violence.

“In this country there’s a huge awareness – we’ve been shaken out of a lethargic state – that you can’t plan things, you’ve got to trust life.

“I was up when the plane hit the towers, working through jet lag. And I knew that was what it was all about.

“I learned a lot from my friends with AIDS about how to live gracefully and well.

“Some people have kids, I’m going to leave a record behind. I want those who listen to it to know who I was, how I felt.

“Our time is short, this is an opportunity to make a statement.”

That statement is made loud and clear on Group Therapy, particularly the deeply personal When I Was A Fool.

The album also reflects her admiration for Roxy Music, whose Paul Thompson played drums for the group, and her love for Mexico, where she has a house.

“I’ve got a jeep, I can throw my dogs in the back and be at the Mexican border in three hours.

“There’s no way you can live in LA and not have Mexico permeate your soul. I’m affected by the culture and people, it’s home to me.”

One thing that comes across, both on the album and in conversation, is that Napolitano is happy with life at the moment.

“I’m over the doubts of youth, the thought that the world doesn’t need another rock band. I know people who do good things, you wonder if you’re doing something valuable. Then I heard from a New York fireman; he’s a fan, all he wants to do is come see the show and have a drink and that really kicked my arse. We’re letting the firemen in free in New York. It made me realise what we do can be very, very valuable.

“I’m more relaxed, maybe more confident – the confidence you get with age. When you’re younger you wonder `am I good enough?’. Well if I’m not good now I never will be. I just do what I do, and I suppose I must be good at it. I’m having a good time, just happy to be alive. This is the year I’ve lived for, all my life.”

Napolitano on tequila, mentioned in several of her songs:
“Tequila is hallucinogenic. I’ve never done a DUI, unlike the president. I don’t do drugs, I don’t even smoke pot any more. I feel healthy. I’m an artist. I gave my TV away when 9/11 came on and filled my head with shit.”

And on art:
“I want to create healing feelings. I hate all these unimportant concerns, `do I have enough?’ I don’t have a cell phone. I don’t care. I love to be free enough not to question myself. I’m responsible for myself, no one else. If I feel like picking up a brush I don’t have to say to myself, `you shouldn’t be painting at two in the afternoon and drinking. If I want to get up at 5am and watch a movie and have a glass of wine, I can; I can go back to bed later. Since I was nine years old I wanted to be an artist. I couldn’t have one without the other (music and art). I remember when I was five drawing and really digging it. At preschool all the kids were crying but I was looking around at all the crayons and pencils, going `mum, see ya later’.” 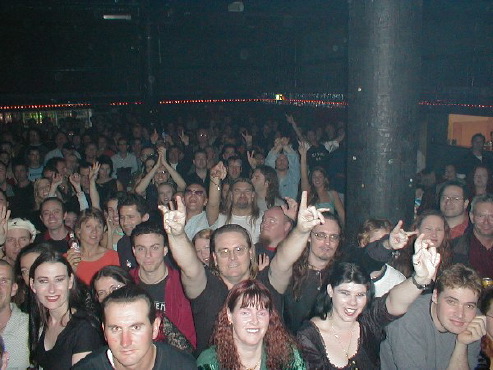 Andy shades me in the second row as Concrete Blonde weave their magic in Brisbane in 2002, with Donna and Mil in the front row. We miss you, brother.

One thought on “Johnette Napolitano, 2002”