During the week I left Brisbane, I took some snaps on my mobile phone to mark the moments. Not all of them, not even the most important ones: just incidental ones as the to-do list ticked down. It went something like this:

After the giveaways and sell-offs, the eBaying and the Freecycling and the dump run, came the packing. The house emptied out as the boxes filled. The wine rack gave some cause for concern, but I figured, we could rebuild it. And in fact, we have. An empty wine rack is of no use to anyone. Ditto the bookshelves. 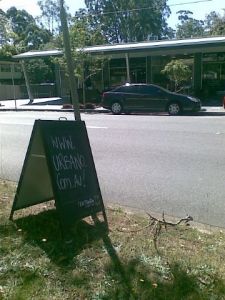 I was extremely grateful that a cafe had opened at the end of my street. And a great cafe at that. One with takeaway coffee and a late breakfast and a BLT to die for. It became something of a hub for last-minute catch-ups, thanks in part to the recent addition of a dinner menu (love the lamb).

shoes off, after the packing

Men came. They chuckled at the sight of the coffin-table, all bound up, mummy-like, in its blanket and tape. They didn’t seem to blanche too much at the third room, lined with boxes filled with books. Three hours and a cuppa later, they left in a big truck with a promise we’d meet again, and I sat on the stairs, shoes off, contemplating how much an empty house can echo, and how sore I’d be the next day.

spaceman on the ceiling

In the absence of, well, anything but a backpack of clothing, it was good to have friends to crash with. They had wine, and coffee, a spare bed and a shower and a loo, and a cute little spaceman stuck to their ceiling. You need friends like these.

Family is also good. They’re like friends with a sense of ingrained commitment. My Dad has an awesome view from his house and an even more awesome viewpoint, and his partner has done a grand job setting up the house and the garden. It’s good to know that, no matter where you are, you know damn well where they will be: watching your back.

After the truck had gone, I had coffee — an iced one, the day was hot — with a mate at Shorncliffe, one of my favourite places in Brisbane. And after that I went for a meditative trundle on the pier, and watched my last Shorncliffe sunset as a ‘local’. No dawn without a sunset.

Another favourite place in Brissie was Kaliber, a funky, narrow club in the Valley with an amazing range of vodka, cool staff, mean pizzas and a fine line in absinthe. They were playing Concrete Blonde’s Joey when I got there. We had a good night, three of us who have all been through this all before each in our own way, and backed up the next week — the last week — with Mexican and burlesque (not at the same time). One thing I like about cities is that you can have tortillas and tassles in the one night. 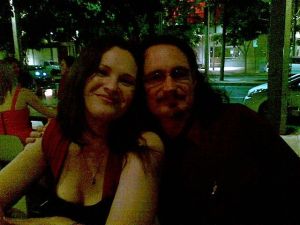 angela slatter and me at dinner

On the last night, after the final inspection of the house and the last cuppa at Urbano and the return of the keys and afternoon tea with a pal and the stumbling across of a friend’s Buffy book (Night Terrors) in a newsagent, it was time for a drink. First at the Queensland Writers Centre cocktail party, coinciding with the Brisbane Writers Festival and launching their groovy Industry IQ program which I’m frustrated to be missing — and what a splendid view of the CBD from across the river — and then at dinner, with some old friends and the cool Dexter dude Jeff Lindsay and some other folks beside. I relented and took a people shot on the phone, because how could you not with the likes of the inimitable (and fellow It Crowd fan) Angela Slatter?

Sydney from the Swissotel

My agent has an annual gettogether for her writers in Sydney. This year, because the usual venue stuffed up the booking, it was at the Swissotel in the CBD. Two thumbs up for the Swissotel and their well-appointed rooms — this was the view from the 19th floor — and their fab staff and tasty bar menu. The banquet was amazing — I went back for seconds of prawns and oysters — and scored a wee pavlova. The event was my springboard out of Brissie, but there were a couple of fellow Brissie scribes there — Kate Morton and Stephen M Irwin with entertaining speeches, Grace Dugan, Louise Cusack and Kim Wilkins — and other reliables from around the country who made the bar a friendly place to be (Graeme Hague, Ian Irvine, Richard Harland and Katherine Howell, to name a few, and all kicking mighty goals that make a young wannabe such as myself mighty keen to get fingers on keyboard again).
And then there was the Melbourne writer Kirstyn McDermott, reason enough to empty your house and say goodbye to your cafe and your sunset, and promise to write to the good souls holding the fort.

Now the gargoyles are ensconced, the boxes packed away (mostly), the computer set up and the kettle plugged in. Better get started, then.