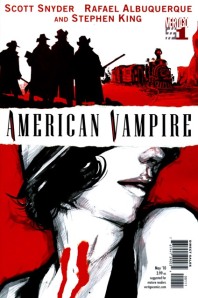 It’s old news, but it’s worth another bite: Stephen King, the man who brought us Salem’s Lot, is at it again, this time with a comic — American Vampire (note the rather tantalising hardover collection being plugged on his site — how long till Xmas?). King’s contributed a story to the opening gambit of the series, helmed by writer Scott Snyder and artist Rafael Albuquerque, aimed at putting the red back into the red, white and blue, he tells the Guardian, a kind of ‘so there’ to the fangheads with issues rather than appetites. Bless!

Salem’s Lot is an ace book, and I can’t help but wonder how it would go today, given the gorgeous slow burn as he lays the whole town out on the table before ripping it to bloody tatters. Not much teen angst and/or suppressed sexual tension going on in the vampire world, there; just a good old-fashioned homage to Stoker’s Dracula, beautifully done.

The link to top vampire books is worth a look, too.

One thought on “Stephen King on vampires with bite”