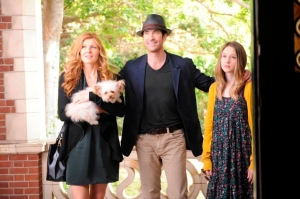 Has it been a year already? Ghosts of Christmas past or what?

Last year we scoffed down American Horror Story, an incredibly thoughtful and homage-laden haunted house story with some exceptional ghost work. Well, season three has just been commissioned, and the first season has recently been released on DVD.

I got sent a review copy of the DVD package, and it’s handsome.

Do not watch the extras if you haven’t watched the show. Half the fun is trying to work out the back stories of the characters and, indeed, work out who’s a ghost and who isn’t, and who will become one and who won’t. So an extra profiling the who and the how of the spooks is great to recapture or put things in perspective, but will screw up the show.

Film fans will enjoy the info about the title credits — great to see some Nine Inch Nails input there! — and the ‘making of’ likewise sheds some light while talking up the show.

Strangely, for a show that worked hard to avoid cliche even while exploiting so many tropes, the ‘Murder House’ extra, dressed up as a ghost tour visit riffing from the show, added little that wasn’t covered elsewhere, and let the side down.

The commentary from creator Ryan Murphy on the pilot isn’t overblown and provides some interesting tidbits and insights.

Online, there’s a shallow doco site about crime scenes/haunted places, and it covers six in Australia. They’ve misspelt Boggo Road in Brisbane and bollocked up the text for Snowtown (awesome movie, by the way!). Sigh.

Still, watching the pilot again reminded me of just how superb Jessica Lange is in this show — indeed, the performances are first rate across the board — and I reckon it will reward a second viewing to appreciate all the bits ‘n’ bobs the makers have used to set up the succinct 12-parter. I remember being a tad disappointed with the final episode’s touch of twee and apparent set up for season 2 (falsely, because 2: Asylum, is all new), so another viewing could indeed be illuminating.

3 thoughts on “American Horror Story, all boxed up”