Bell Shakespeare played Ballarat’s Her Majesty’s last night with Henry V, and it’s one of the best adaptations I’ve seen. A play within a play, both ring true: it’s an absolute triumph for the creative team, headed by director Damien Ryan, with an ingenious set built by Malthouse Theatre.

The stage is set in a London classroom during the Blitz, 525 years to the day after the battle of Agincourt, where a teacher distracts those sheltering from an air raid with an improvised performance of Henry V. But first, there’s a quick grounding in the history leading up to the English king’s ascension with some help from the blackboard and others of Shakespeare’s tales: clever.

The set — three bookshelves, a ladder and assorted odds and sods, such as cricket bats, a mop, and crowns and dresses made of newspaper, and smart use of the play itself in book form — proves versatile and evocative, backlit with bomb flashes seen through shattered windows.

The play within a play is a superb device, as the actors portray the makeshift cast — primarily students — putting on Henry V, yet being pulled out of the play by events in their world: the mirroring, the splicing, are brilliantly handled. Ghosts and a downed German pilot, his parachute become part of the set, are just some of the echoes that enrich the drama.

Lighting is superb, and the sound is also well crafted, balancing Churchill’s ‘finest hour’ against Henry’s ‘we few’, putting the actors to work on percussion and choir, and signalling the transitions between Blitz and Shakespeare with bombs, planes and sirens. 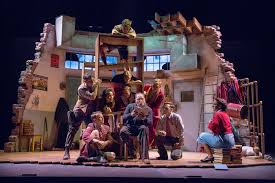 The actors do a great job of handling this meta performance, with all bar Henry (Michael Sheasby) handling multiple Shakespearean roles as well as their 1940 characters.

As Kirstyn noted afterwards, it also allowed the performance to skip scenes, with the understanding that they have been played as the crew while away their terrible night, finding comfort and distraction in the Bard.

And the ending, with only ghosts remaining … a song and that feeling of futility evoke memories of that final ‘God Bless America’ of the Deer Hunter.

In much the same way as 1984, played at the same venue earlier this year, struck a chord with the dangerous, hypocritical idiocy the Abbott government is inflicting on this country, so Henry V has provided a counterpoint to any jingoistic overtones of the 100th anniversary of World War I. None of which is to question or belittle the valour of those on the ground, but rather, the original impetus for the conflicts: the reason for the rattling sabres to be drawn, and the consequences that last long after they are cleaned and sheathed.

The play is touring until 15 November: catch it if you can.