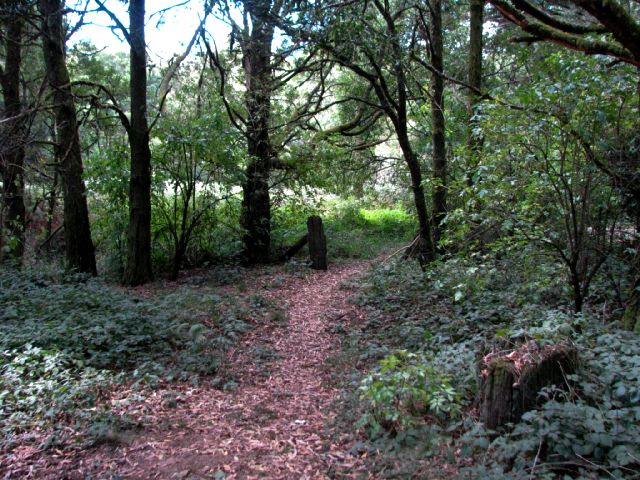 There is something about an overgrown cemetery. Headstones covered in ivy and moss, that slow return to nature, memorial if not memory fading. So when I saw a story in the local paper about just such a graveyard near Blackwood, not even an hour from Ballarat, I had to check it out. Besides, what better way to spend Valentine’s Day?

Unfortunately, the cemetery wasn’t marked on our Google map, and guided only by this very informative blog post, our first foray yielded a couple of miles of rough dirt road but no graveyard outside Blackwood. (I’ve since found this website, which offers GPS co-ordinates for oodles of cemeteries.)

But with the clues contained therein and a serendipitous spotting of a road sign outside nearby Newbury, we found our way to the Blue Mount Cemetery. (Heading from Trentham, towards Newbury, take the gravel Old Blackwood Road on the left and shortly after, on the right, Tower Track.)

The fenced area, at the base of a hill on which sits a tower, was covered by ferns and blackberry vines — bonus, the berries were ripe. Nom nom nom.

Only about a dozen gravesites were visible. The latest interment seems to have been in the ’60s, although there is a more recent memorial plaque. The couple of family names visible on the few remaining headstones suggests some district pioneers here.

Scat suggests there might also be wombats in the area.

There is no signage, just the gate posts by the side of the road and the sagging wire fence to denote the site.

It reminded me a little of other wonderful wild cemeteries in the UK, Highgate and York, where the line between existence and nonexistence is blurred by wild growths of green. A little melancholy, even under the sun, but overall peaceful and quite beautiful. If you want a symbol of the passing of the human age, this would be one of the more powerful ones.

For the record, the Valentine’s Day celebration of togetherness included a picnic by a duck pond in Trentham, a new gargoyle for the patio and some yard work, fish and chips and a bottle of red. Death and life thus marked, the great wheel turning, all in its own good time.