Midnight Echo is ramping up to the release of Issue 8 at the end of November — herewith, some dirt on my yarn in the magazine, ‘Hello Kitty’. It includes an extract, which makes me stress that the attitudes and opinions of characters therein are not necessarily those of the author …

And Issue 9, with a theme of legends, is open to submissions. 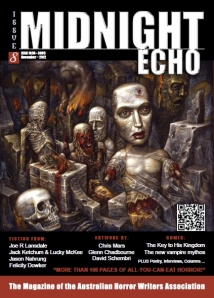 The cover of Midnight Echo 8 has been released on to the unsuspecting public — it’s rather shiny, ain’t it?

The magazine is due out at the end of November — egads, that’s this month already! — and features some very fine writers, some from overseas even. And there’s me, with a story about a cat.

This story sprang out from behind a bush near a bus shelter and found full form during the heady, sweaty hours of Rabbit Hole at the Emerging Writers Festival earlier this year. There was a tweet at one stage about ‘the cat’s gonna get it’ — this is that story. It’s called ‘Hello, Kitty’. It’s not nice. Not at all.

I almost didn’t finish it, because it’s not nice. At all. But then I thought, ‘what would Haines say?’, and so emboldened, I said fuck it. And wrote it. And the triumvirate of editors of Midnight Echo 8 bought it. And now it’s rubbing shoulders in good company, and you’ve got to be happy about that.

There are a few of my stories that I wish certain people could’ve read, who never got the chance to.

This is one of those.

And I’d be remiss not to point out that Queensland Writers Centre is again running Rabbit Hole, November 9-11. Free. Fun. Get words written. Just watch out for the cat.