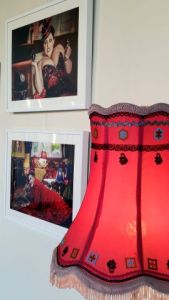 Spring sprang, momentarily, on Sunday, so we carved off a chunk of the arvo and hit Ballarat to tick off a few more sites in the Foto Biennale.

There was no doubting the power of the documentary images: in the City Hall, Mitchell Kanashkevich‘s superb depictions of life in Belarus; and, more naturalistic, a joint project offering slices of life in the town of Swifts Creek in Gippsland, ensconced in the upper floor of the refurbished restaurant and music venue Sutton’s House of Music (love this space). Keeping the Creek company were some most excellent travel pictures from Lesley Costley-Grey — one of my favourites, a smashed typewriter on the footpath, already with three red dots beside it.

There were interesting techniques such as cyanotype and sunshine (at boutique beer store Coach House Ale near the railway station) and photogravure (at Backspace Gallery, which also has on show some stunning South American landscapes — flamingoes add splashes of colour in some).

A couple of Vicki McKay’s “Bohemia” images, inspired by Norman Lindsay, at the Miners Tavern (luckily, you don’t have to pass the pokies to get up the staircase to the upstairs exhibition, which has been thoughtfully marked as featuring nude women *gasp*), also popped, but I really enjoyed the personalities on show at the Regent theatre, where Erin McCuskey has a stills exhibition of characters in a fictional town.

More starscapes, these from Tim Lucas, at the Beechworth Bakery (amazingly, no bee stings were eaten during this visit); a seascape with ship carved into panels at the Yellow Espresso cafe (yummy coffee that you can take away, unlike the big print), and some exceptional images from India by Rochelle Wong at the Trades Hall were among the list that took in about a dozen or so venues. Some others were closed (Sunday, you take your chances in the Rat), but a peek through the window was enough to go yea or nay to a revisit.

We also caught up with the print books competition, which showed a range of styles and themes. One, for instance, had folded pages; another was a narrative of being nekkid and in love in the woods; another had landscapes from the waterline, taken from a kayak. Another documented female residents of a town.

I love the former Freemasons building, now Lost Ones Galley, on Camp Street with its slightly risky stairs down to the welcoming basement (and outdoor toilet block) with sofas, bird cage, and a puffer fish under glass.

So not only does the biennale open up a range of photographic topics and techniques, it also gives access — encourages access — to a range of buildings that maybe wouldn’t normally get a visit, and puts galleries and cafes and the like on the radar. Even if you do cop the occasional glare over a coffee cup for peering over someone’s head at the pictures.