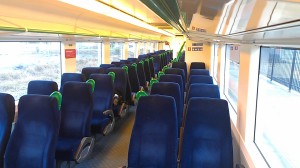 The office isn’t always this quiet.

Zena Shapter has been collecting images and comments from writers about where they write. Over there now, a look at both my cluttered home work space and the ‘mobile office’ that is the V/Line.

I consider myself to be a full-time Melburnian since November, when the move into my fiancee’s rental had been accomplished and my car was parked in the driveway.

At the end of November, we were given notice that our house was to be sold and we’d need a new abode. The nest, so recently feathered, was to be torn down, figuratively if not literally.

So it’s apt that the Queensland Writers Centre has asked me to profile my writing space as part of a blog tour: a little slice of space and time, recorded on the interwebs. This is the workroom. It’s a shared office, poor Kirstyn having surrendered her haven in my favour, so that I could set up the desktop. The result is a gloriously messy meld of her stuff and mine.

Some of the features:

The desktop PC. I don’t mind writing on a laptop, but I prefer the solidity of the PC, especially for editing. It’s got everything on it — email and old files and a bunch of RAM — and a full-size keyboard with all the keys in the right place. Stuck to its side is a picture I took of a sunset over the farm on which I grew up — my heart’s home.

The CD player. I love writing with music playing. It’s part mood-maker, part white noise generator. The caveat is that it must, for the most part, be familiar, so it can indeed fade into the background once I’ve got the groove.

Sekhmet and friends. One of the things Kirstyn didn’t have to move in the office when I merged in was her Egyptian stuff. I’ve always been interested in the ancient place, with a special affinity for Sekhmet (especially since a visit to Karnak). I’ve got a couple of figurines of her and the great scribe Thoth watching over the keyboard.

The screen saver. This changes, but this one is a picture of New Orleans’ French Quarter, taken from the Algiers ferry. If the farm is my heart’s home, the Vieux Carre could well be my soul’s home. It’s my most favourite of cities.

So that’s the den. But there’s more to writing space than where the words hit the page.

Our abode, about to be vacated, is near several small parks that have provided much-needed respite from the four walls and screen. One has these amazing gateposts and a leafy path, the other is an ‘urban forest’: an overly sculpted strip of scrub flanked by houses on both sides, with a couple of muddy ponds supporting ducks and a bunch of other birdlife. To stretch the knees, feel the breeze and the sun or, occasionally, the coming rain wet on the wind, and allow the ideas and characters to jumble around in free-thought has become one of my favourite parts of the process.

Now there’s a new park to be explored and a new desk waiting bound in cardboard in the garage. We’re hoping to have room enough for both of us to have our own dedicated writing space in the new house. For now, though, I’d better go make use of this one while I can.