Clan Destine Press has extended its 50 per cent off sale through to the end of April. That means half-price books or, if you like, both books in the Vampires in the Sunburnt Country duology for the price of one. $27 for Blood and Dust and The Big Smoke in paperback. Or $6 all up for B&S and TBS in ebook. You might also like to check out the vampire novel from Narrelle M Harris, Walking Shadows (decidedly tasty!).

Just a reminder that Clan Destine Press is offering 50 per cent off all stock until March 31. That means half-price books or, if you like, both books in the Vampires in the Sunburnt Country duology for the price of one! $27 for Blood and Dust and The Big Smoke in paperback. Or $6 all up for B&S and TBS in ebook. Stake ’em out while you can!

Clan Destine Press is offering 50 per cent off all stock until March 31. That means half-price books or, if you like, both books in the Vampires in the Sunburnt Country duology for the price of one. $27 for Blood and Dust and The Big Smoke in paperback. Or $6 all up for B&S and TBS in ebook. Killer!

Anna Funder’s acceptance speech, delivered by video, on winning the Miles Franklin award for All That I Am has received a lot of coverage of varying degrees, thanks in part to her sideswipe at Queensland Premier Campbell Newman’s cancellation of the state’s literary awards. She says,

Prizes like this one are important to writers, but they are not necessary: we would keep writing without them, as writers do in many countries where they are banned. But prizes are very important to the nation. They show that free speech is alive and unbeholden to government, or to media barons. And they provide signposts as to quality when it can be hard, in a bewildering topography of culture—high and low, in print and on-screen and in the fractured online world—to sort the enlightening and soul-feeding from the 50 Shades of momentarily gratifying.

You can read the full transcript here.

Meanwhile, Newman continues his bull-in-a-china-shop approach to Queensland’s social fabric, trying it appease the religious fanatics and arch neanderthals typified by Bob Katter’s turn-back-the-clock party while holding some thread of decency. The changes to the same-sex marriage laws and surrogacy laws he’s enacted are ludicrous and insulting and worthy of derison, the semantic game being played highlighting Funder’s point about the importance of literacy in a free-thinking society. A ‘registered relationship’ has overtones of vileness; the ACL need to understand their definition of marriage is neither exclusive nor universal, nor even accurate, nor even logical. A vocal minority should not be dictating government policy that has absolutely no impact on their quality of life. Newman has been praised for standing up to vocal minorities in the past; what a shame he didn’t have the fortitude to do the same here.

Neither logic nor compassion seem to have much of a home in Queensland these days. Maybe those wielding the stupid stick need to read more, and read more widely. As Funder says,

This fusing of mind and soul with strangers is what fiction, the art form that is most personal, most interior permits us. Fiction helps us understand what it might be like to be another. It makes us understand that we are different. And also, that we are the same.

Meanwhile, the non-government supported Queensland Literary Awards have secured some funding from CAL and UQP and will be held on September 5.

Catching up after time away and largely off-line at Adelaide Writers Week, and there’s good news:

Mythic Resonance: editor Stephen Thompson — how long has it been since he compiled the Vision writers group’s Glimpses anthology? — has a new anthology, Mythic Resonance, which, as the name suggests, riffs off myths. Excerpts are available at the Specusphere.

Thirteen O’Clock: a new aggregator of dark fiction news has hit the interwebs. The blog also posted an excellent piece on the difference between horror and dark fantasy recently.

Narrelle Harris reveals Showtime: The Melbourne author of The Opposite of Life is the latest in Twelfth Planet Press’s Twelve Planets series, offering ghosts, vampires and zombies in a four-story collection that includes an appearance of some old friends.

Aurealis #48 in the ether: Aurealis #48, with stories by Rick Kennett and Greg Mellor, is available from Smashwords.

Ticonderoga living large in 2013: the WA press already has an exciting schedule for 2013, including several collections by both veteran and tyro writers and the continuing Year’s Best Fantasy and Horror.

And Chris Meade on Queensland’s writing future: the if:book pioneer reflects on his experience in Queensland and considers how my home state might leverage itself in the global literary landscape with ‘big sky writing‘. It’s also worth checking out if:book Australia’s 24 Hour Book Project for a hands-on view of how technology is changing the publishing industry.

As part of the National Year of Reading, the Our Story program set out to select one text from each state and territory to fly the flag for a reading campaign. Six titles were shortlisted for each; the winners were announced earlier today.

Queensland’s book is The White Earth, by Andrew McGahan, and it’s a cracker story. It riffs off the Mabo land rights decision and the incredible fear and uncertainty in rural Australia about the right to continue to live on and work land that had, in some instances, been in the same family for several generations. A lot of terra nullius talk, a lot of right wing clap trap, some very real concerns.

McGahan draws on his childhood in setting the piece on the Darling Downs, where a young boy and his widowed mother come to live on their grandfather’s property, there to see the politics of the era played out and to uncover some unsettling family truths harking back to the days of white occupation and settlement.

The other finalists in the Queensland selection were: 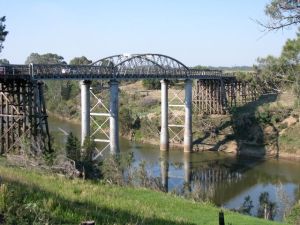 The Dickabram bridge at Miva is an unusual piece of architecture: massive pylons, that arch midway, the timber decking that rattles with every passing vehicle. It’s unusual historically, too, being one of few remaining joint rail and road bridges in the country — a famous other one, with arch, is the Sydney Harbour Bridge.

The Dickabram bridge opened 125 years ago and made a massive change to its corner of Queensland. My great-great-grandfather recalls the strife and inconvenience of having to ferry produce across the Mary River in the days before the bridge. The delay in getting to market could be costly.

How do I know about my ancestor’s travails as a primary producer at the turn of the last century? Because he left a memoir. The written word: you’ve got to love the insight into history it can provide, with all due care for its jaundiced eye.

There was plenty of history at Miva at the weekend: oral, written, steam-driven.

This spot on the map, little more than a couple of houses now — vacant blocks where the railway station and the shop used to be, but the QCWA Hall where I went to Sunday School is still standing and looking smart — had a massive population boost at the weekend. Caravan city. Music. Hubbub. All to mark the anniversary of the local landmark.

The governor, Penelope Wensley, was there and all, amongst a bevy of politicians. She gave a good speech from the back of the truck that served as a stage: gentle humour and a mention of YouTube, evidence of decent research about the mighty span and the way life was back then, right down to the ghost of the bloke they say might, or might not, have been entombed in a concrete pylon. And she gave acknowledgement of the indigenous people, too: elsewhere, a few snapshots of Kanakas and Aborigines, if you cared to look on an otherwise white colonial day.

On the stage with the governor was Will Nahrung, one of the chief organisers, a rellie as you’d gather by the name, a bloke who used to deliver groceries to our farm from the back of a big flat-bed truck, once upon a time. He still lives just up the road from the bridge, right next to that vacant space where the family store once stood.

My uncle, Lex Kunst, was among the singers — country all the way, as you might expect when you’re surrounded by cane fields and paddocks dotted with beef and dairy cattle. Another relative, Don Nahrung, was among the exhibitors showing off machinery of yore: massive chainsaws and a steam engine, old vehicles and more pumps than you could point a dipstick at; one mob had a wall of electric fences.

Up the hill there’s a cemetery containing my great-great-grandfather’s bones, and on another nearby hill there are the stumps of the house where he and his family and descendants lived, my dad and his brother and sister included. Maybe it was those stumps. Maybe it was that ridge. Maybe it was that fig tree. Landscape and memory not quite meeting. They left in 1949; back at the celebration, we saw a picture of the truck laden with their furniture crossing the Dickabram bridge.

At the anniversary bash, the Queensland sun beat down and the dust rose underfoot. A local hall association sold $2 soft drinks, tea and coffee, and $6 burgers, and around the riverbank park the conversation was all about the years gone by, the weather, the good-sized crowd. The day, and the people, too, passed all too quickly, all caught somewhere between the then and the now.

And down below, the river, mud-brown and languid, flowed on. 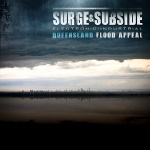 Musicians from around the world have banded together to produce a massive compilation of music, with all proceeds going to the Queensland flood appeal. Called Surge & Subside, the album features musicians with an electronic and industrial bent, including Android Lust, Assemblage 23, Angelspit, Collide and Psyche. More than 40 tracks for the ridiculously reasonable price of $20 for the double cd (including shipping) or $10 for the download. It’s another case of a community rallying to aid their own, and more besides, in a time of strife. Great stuff.

My mates at synth-driven band Tycho Brahe have been washed out of their Brisbane home by the recent floods — luckily, they were able to get most of their gear — and their kids! — out before the flood water inundated their two-storey house — both storeys. Most, but not all, and the clean-up is costing a mint, not to mention the dislocation of renting and having your possessions, right down to your chooks, spread across spare storage space across the city. Tycho supremo Ken shows the studio damage in this blog post and says the easiest way to lend a hand is to pick up some merch from CDBaby. These guys aren’t just great musos, they’re great people: snaffle a cd or a download if you can. Your ears, and the band, will be grateful.

Update: Ken and George of Tycho were in the Brisbane Courier-Mail talking about the flood impact; it’s a brief piece, but you get the picture.

The list of authors appearing in 100 Stories for Queensland has been announced and it’s a great looking list drawing writers from all over the place. The anthology is to raise money for Queensland flood victims.

The book is due out on March 8.

I’m particularly interested in seeing what Alan Baxter has contributed, given the antho was looking for uplifting yarns *grin*