The writing group to which I belong hit Lake Mulwala at the weekend for a three-night writing retreat. What a brilliant spot it was, with a dozen of us camped in a two-storey joint on the lakeside: a drowned forest, a plethora of birds — including cockatoos and a black swan who came a’visiting — and some amazing moon rises, including a blue moon!

The town sits on the New South Wales side of the Victorian border, across from the rural town of Yarrawonga, and took about three-and-a-half hours of scenic driving to get to from Melbourne. We also popped into Euroa to stretch the legs and scarf down a very tasty lunch.

It was also fortuitous that the Rutherglen wine district is only a short drive away. After tasting and lunch ($20 with a drink, w00t!) at Rutherglen winery in town, we hit All Saints (with added cheese!), Stanton & Killeen and Campbells . We returned with the rattle of bottles; fortifieds mostly. The muscats hit the sweet spot.

But the aim was writing, when we weren’t chowing down on our self-catered banquets. And writing we did, each in their own way. I managed to untangle a lot of the knots in a new novel, so slowly but surely that yarn is coming together. There was plotting. There was scribbling. Typing. Solitaire. Ahem. 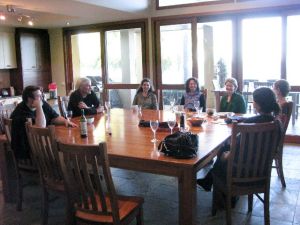 It is such an advantage to be able to get away to somewhere quiet with like-minded souls and just butt up against the story. With only cockatoos and pretty sunsets to distract, it was a very productive and rewarding time indeed. Having a nearby walking track along the lake edge was an asset, too, because sometimes the brain just needs some downtime to process and come up with some subconscious solutions.

The retreat has added impetus for a new Supernova website, which seeks to draw together the various news and views of the members as well as extol the simple virtue of having a constructive support network to keep you on track. Ellen has written about the retreat there to help get the ball rolling.