The combination of ridiculously cheap airfares to New Zealand and a gig by bucket list rockers Sisters of Mercy, then not having announced sideshows to their Soundwave appearance, resulted in a three-night stay in Auckland last month.

The weather was forecast to be rainy for the duration, so our first outing was to Waitomo to take in some of the caves there — at least we’d have a roof over our heads.

The caves were a picturesque 90 minutes’ drive or so to the south, the road narrowing from two lanes to one and twisting in part alongside a river. Cicadas interrupted the drive with bursts of chittering as we passed clumps of vegetation. There were, surprisingly, more dairy cattle than sheep. A brunch stop was more than pleasant and the coffee of uniformly good quality across our stay. Big tick, NZ! 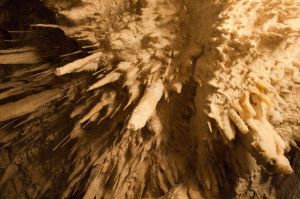 Waitomo Glowworm Cave was the first stop. The building is an impressive piece of timber architecture set in hilly farmland with walking tracks all around. One led through a swatch of rainforest, a very pleasant stretch of the legs before going underground.

The caves have been well set up with smooth floors and atmospheric lighting. The highlight is at the river level, where we bundled onto a tinnie and floated out, our guide using overhead ropes to control our direction, into darkness. As our eyes adjusted, more and more glow worms appeared overhead, their starry glimmer reflecting in the still water.

The next cave, a short drive away, was Aranui. The entrance was in a forested hillside, and it was a lot drier than the glowworm cave, but possibly featured more spectacular formations, with many melted-wax style formations and plentiful variations of stalactites and stalagmites, and a monstrous cathedral.

Then it was back into Waitomo to catch a bus to Ruakuri cave. The entrance was an SF spectacle, a spiralling ramp some 40m deep with a stone formation under dripping water at its base. The ritual for entering and leaving was to at least wet one’s hands, purifying on entering, washing away any spirits on exiting. Part of the cave is sacred to the local Maori and off-limits — hence this spectacular piece of engineering.

Down in the dripping cave, the sound of rushing water never far away due to the underground river that carved out this complex, the lighting is set on timers to follow the visitors so as to minimise impact in this dark environment. Duckboards keep our feet out of the puddles and there are some spectacular formations and rock falls. At one point, it’s lights out, hands on shoulders single-file into the dark, to take in the beauty of glow worms close up. Seeing the incredible sticky tendrils the worms use to trap their prey was most impressive. 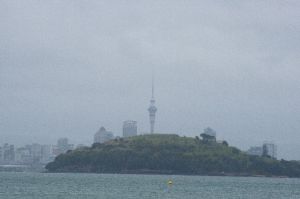 On our second full day in Auckland, under threat of clouds, we embarked on a catamaran for a 45-minute voyage to Rangitoto Island. The island is a dormant volcanic cone, an intriguing environment of tossed black stone and rainforest vegatation. At the dock, the narrow, rather rough beach is dotted with holiday cabins called bachs — some have been removed, their location marked with plaques.

We tromped up the uneven black soil and stone path that winds up the slope to the crater rim, completely forested over. There’s a duckboarded platform at the crest where a former military observation post and wireless room still stand watch over the waterways, Auckland’s skyline hazy on the horizon. Also of interest are some lava tubes, small and cramped, and a duckboard area in the mangroves.

The strata of vegetation, from the sparse seaside flats to the forested slopes, make a fascinating ecology seemingly ruled by birdlife.

The island has been linked to another by a bridge, but we didn’t have time to check that out. One day is simply not enough to appreciate the Rangitoto landscape. 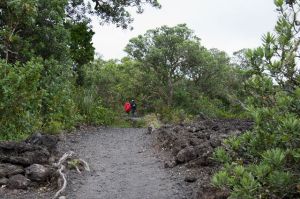 This Auckland landmark was a good place to kill a few hours between hotel checkout and airline check-in, but it’s showing its age. I got totally saturated in the rainy sprint from the car to the entrance, but the line-up — there’s a single ticket booth handling both prepaid and on-the-day tickets — took so long to run in that I had stopped dripping once we got inside.

There, observation windows in the entrance hall reveal two species of penguins; there’s a mock-up of Scott’s Antarctic hut with heaps of period artefacts and documentation about the explorer; and there’s an extensive children’s educational play area.

Penguins are otherwise viewed from a ‘snow mobile’ people mover that jolts around the enclosure at a fast walking pace while recorded information plays through the speakers. We’d aimed to be there for penguin feeding but been foiled by the long line-up, but we went on the snow mobile several times to get our fill, and were rewarded with three penguin chicks looking cute and fluffy at their parents’ feet.

Elsewhere, a limited cafeteria with even more limited space serves the worst coffee we had, but hey, when you’re drenched, you’ll take it.

There’s a pool in which some massive rays are fed — very cool — and a walk-through glass exhibit showing off numerous fish types. Another walk-through reveals several species of shark — you can scuba with them, or simply stand in a cage with a snorkel. Another series of aquariums houses numerous types of sea life, including star fish, an octopus and moray eels, and many more fish. A special section houses a series of seahorse tanks.

There’s a bit of a mixed message in the shark area — info boards exhort an end to fin farming (and rightly so) and educate about how sharks aren’t the fearsome critters we’ve been led to believe, and yet, it’s the danger of diving with the sharks that’s emphasised in the brochures, and the Jaws soundtrack plays in the area.

Still, getting up close with marine life is a delight and the complex is a remarkable example of retooling — the original structure was a sewage works — made somewhat poignant by the life story of Tarlton himself, who comes across as a bit of a Harry Butler or Steve Irwin of the seafaring world. Sadly, he died only months after the complex opened.

It’s worth noting that Auckland has superb food. We splurged on the revolving restaurant, Orbit at SkyCity, and found that it wasn’t that big a splurge at all. It was very neat knocking back the three-course special while watching the city lights slide past. The value was enhanced by having the observation deck included in the price, normally $28 a head.

We also ate at Princes Wharf, a yuppie area being gentrified by the look, with an array of cafes and restaurants offering a range of menu prices roughly indicated by not only the dress code of the patrons but the quality of the table cloths. The highlight was a superb seafood basket at Y-Not, and a full-bodied pinot noir to wash it down.

All in all, a most enjoyable sojourn, so close to home but yet so delightfully different.