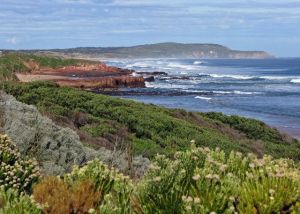 A weekend sojourn to Phillip Island shows why the outcrop off the coast of Victoria is such as a popular destination for Melbournites looking to escape the big smoke.

We hadn’t even reached the island, a mere 90-minute drive down the M1, before we were lured off a side-road at The Gurdies to sample local wine and cheese at Ramsay’s Vin Rose cellar door — quite presentable cab sav and pinot noir accompanied by mild brie and blue, amongst others.

As if that wasn’t enough temptation, the Phillip Island Chocolate Factory lurks on the main road, just after you’ve crossed the bridge from the mainland, and it’s wares are very tasty indeed.

We spent the night at the Banfields motel, a very tidy, very friendly and very quiet conference centre boasting the only cinema on the island, though alas we’d missed the Sunday matinee. Not that we had time. We were on a penguin mission! A stop to see Captain Grossard’s lonely cliffside grave — and feel the icy wind blowing in from the sea — was enlivened by the presence of two quite unconcerned cape barren geese as we made our way to the parks complex at the Nobbies.

We arrived in plenty of time for our dusk penguin parade viewing. No pictures are allowed at the wildlife centre, a welcoming commerical building with oodles of duckboards to ferry the crowds to their stations. We forked out for Penguin Plus tickets, giving us a secluded, small stadium by the beach where the penguins have worn a wide track as they make their way from the sea to their burrows littering the foreshore and surrounding cliffs. There are some 60,000 of the little birds in the rookery — the last on the island. (The little penguins were once known as fairy penguins, but political correctness has apparently kicked in.)

The penguins were awesome, coming up in waves. It was like something from the D-Day landings, with little penguins advancing in platoons, flankers and point men out, a little hesitant about entering our softly lit viewing area, then charging: some hobbling, some weaving, some tripping, others darting forward at a furious clip. Some went under our platform, others paused at the very edge, only metres away, to give us the beady eye. We had about an hour of viewing before having to make our leisurely stroll back along the boardwalk to the complex.

Pino’s Trattoria, still open post-penguins on a Sunday night, provided the perfect remedy for the night chill, though the beachside viewing platform hadn’t been as windy nor as cold as we’d expected.

On Monday, the breeze was still up, but we found it fell away to nothing on the lee side, offering very pleasant conditions for beachcombing — not a bad way to spend the day after our seal tour was cancelled only two hours from departure. We had time to only see a few of the parks and beaches, but it was enough to know we want to return and spend more time taking in the natural sights. Red rocks, black basalt formations, wild flowers, and some truly amazing waves got the cameras clicking.

We topped up with a massive coffee at the Lil’ Honey Cafe at San Remo before cruising back to Melbourne.

This was my first real sample of regional Victoria since moving to Melbourne, so it bodes well for further exploration. I can certainly see myself hitting the island again — but not at Grand Prix time!