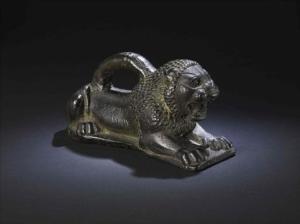 The Mesopotamia exhibit at the Melbourne Museum has more cuneiform thank you can point a stick at. Some might say they can see direct links between this first recorded writing and my own scrawl, but given these ancient scribes were using a pointy stick and a wet clay tablet, that’s being unfair to them. What an exotic, precise script it is, evolving from pictographs to poetry. And Gilgamesh, of course. Where would we be without that ancient epic, hey? There’s a piece of it at the exhibit. And I missed it! Skedaddling to cram in as much as I could before closing time, this chink of literary history slipped under my radar. Honestly, you want a good two hours to work through the exhibit, a collaboration with the British Museum.

As well as the clay tablets, there are figurines and implements, a walk through the region and its history with focus on the main urban centres of the three early empires (Sumer, Assyria and Babylon), stunning relief pictures of battles and — a little sadly — lion hunts, some of which have been given hi-tech interpretations to help understand the wonderfully detailed graphics. There is one brilliant, touching image of a wounded lion on its death bed … 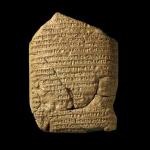 There are cylindrical seals shorter and not much rounder than a pinky finger that make incredibly detailed pictorial seals in clay. Recreations of artifacts. Agatha Christie makes an appearance — cleaning ivory figurines with her face cream! Very cool five-legged lammasu gate guards, five-legged to ensure the legs add up from both front and side views. An intriguing silver goblet found squished ‘hidden’ under a flagstone.

I would’ve liked more direct translations of the cuneiform tablets, just to put the scratchings into better perspective, and to get more of a feel for the language of the day. Still, seeing artifacts that someone made, thousands of years ago, that were used day to day, and here they are, you king whose name still endures, you unknown sculptor who made such beautiful images … it’s quite amazing.

Who couldn’t be entranced by the slow unveiling of this once-mysterious, still somewhat obscured, piece of history with its marvellous pantheon, towering ziggurats … and canals?!

Luckily, the paperweight pictured here wasn’t in the rather limited museum store offerings, although there was a rather cool, spindly Pazuzu figurine …

Afterwards we went to Fitzroy to meet friends for dinner, and, as you do when in Brunswick St, killed a very pleasant hour in one of my favourite bars, Polly. Skipped the rather yummy $7 pizzas (though the menu was different to our last visit and rather enticing) but kept the pangs at bay with dips and coffee while slumped in one of the red velvet armchairs. And then that dinner, across the street and down the block and up the stairs at Nyala African Restaurant. So totally yummy and relaxed.

Sometimes, it’s good to have a day like this to remind you why you live in the big smoke, eh.

2 thoughts on “Mesopotamia, and a taste of Africa”