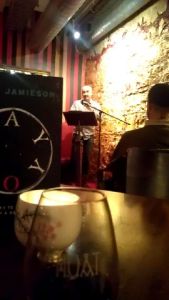 I caught the Wheeler Centre’s Next Big Thing: Spotlight on Queensland event on Monday night. It reminded me of those heady days of Queensland Writers Centre’s Wordpool, cramming into a sweaty bar to hear a mix of established and upcoming writers bare their work. Community-building. Great stuff. (see Whispers, Queenslanders)

On Monday, in the intimate and rather spiffy surrounds of the Moat Bar and Restaurant in the Wheeler Centre’s basement (happy hour: BONUS!), four Queenslanders took the stage. 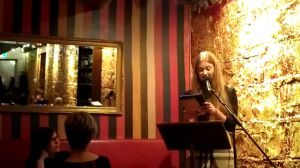 First off the block was Bri Lee, reading a narrative non-fiction piece published in Voiceworks, about her experirence on a hunting trip. Descriptive, self-aware, highlighting the dichotomies of the experience and the hunter. 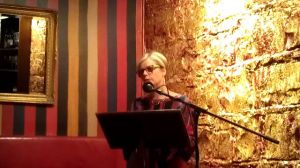 Sally Piper was up second, reading from her 2014 debut novel, Grace’s Table (it was great to catch up with Sally, following her profile interview for WQ last year). Sally read two excerpts, highlighting how food — its preparation, serving and consuming — provided a window into the shifting structures of a family. The novel takes place in the course of a meal — a second novel is being shopped around now, so keep an eye out.

My old mate Trent Jamieson brought the vampires to the table, with a suitably chilly section from his brand spanking new novel Day Boy. The short chapter, its cold theme sympathetic to the chilly night outside, was everything you expect from a Trent story: atmospheric, literate, touching. And in this case, just a little spooky, too; it gave me an undertone of Let the Right In One, perhaps a little of that wonderful scene from Wuthering Heights when the ghostly child is seeking entrance. I HAVE THE BOOK! Thanks to Embiggen Books, who were selling copies of the readers’ work. The Brisbane launch is TOMORROW (25 June). 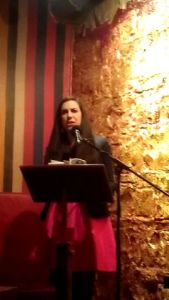 Excellent curating, highlighting a great mix of talent, who all read well — not always easy with clinking glasses and background conversation to contend with.

The Wheeler Centre’s Next Big Thing event is held monthly.

Welcome to 2013! To get in the mood, here’s a shiny new clip from Brisbane band Tycho Brahe, courtesy of cool Lego clip maker Forlorn Creature:

In other recent-ish news:

Way to kick off a new year or what?!

So last week it was my turn in the Q&A to talk about my next big thing (Blood and Dust), and I tagged five writers to share theirs. Today is the day!

Get in on the ground floor with new projects from:

Angela Slatter tagged me in this Next Big Thing writerly chain thing, in which we answer the questions below before sending the same queries off to five of our pals. Blood and Dust is my next ‘big’ thing, to be released soonish in digital format by Sydney publisher Xoum. Let’s get started.

1) What is the working title of your next book?
Blood and Dust.

2) Where did the idea come from for the book?
The story began more than 10 years ago in a role playing game I was running while living in Rockhampton. Add in my dissatisfaction with the watering down of vampire as monster and metaphor, plus my love of Australian stories, and this yarn finally emerged. It originally moved from the outback to the big smoke, back to the outback, so I’ve cut the yarn into two standalone novels. Blood and Dust happens mostly in rural, regional Queensland; The Big Smoke — still a work in progress, and uncontracted — happens primarily in Brisbane.

3) What genre does your book fall under?
Let’s call it a supernatural thriller in which bad things happen. Does that qualify as horror?

4) What actors would you choose to play the part of your characters in a movie rendition?
I’ve not thought that far ahead, but it would be exciting to see so many opportunities for Aboriginal Aussie actors to go crazy! It’d be a multinational cast, too: Eastern Europeans, English, Asian-Australians, yobbos. The sequel brings in serious Western European and US action. Get me the casting agent, stat!

5) What is the one-sentence synopsis of your book?
Bad things happen when an outback mechanic gets caught in the crossfire of an outlaw vampire motorcycle gang and a big city vampire gang.

6) Will your book be self-published or represented by an agency?
Blood and Dust was sold to Xoum by my agent, Selwa Anthony.

7) How long did it take you to write the first draft of the manuscript?
The first draft took probably more than a year to pull together. That was in the late 90s.

8) What other books would you compare this story to within your genre?
Based on hearsay, because I still haven’t read the sucker, maybe 13 Bullets or, in terms of nastiness and based on the disappointing movie version, 30 Days of Night.

I like to think of it as Anne Rice meets Mad Max.

9) Who or what inspired you to write this book?
This is a little like Q2, but let’s run with it and say Bram Stoker. He’s the chap who crystallised my love of supernatural, Gothic literature with Dracula. You’ll find references to it, Stephen King’s Salem’s Lot and a few others besides, in Blood and Dust: little homages to the greats of vampire lit. How would vampires survive in the Sunshine State? This story is one answer.

10) What else about the book might pique the reader’s interest?
If this were a DVD, it’d have warnings on the cover for coarse language, violence, adult themes, drug references, sex. But, y’know, it’s got a big heart, too.

That’s it from me. I direct you to my five victims to find out about their Next Big Things!