Ticonderoga Publications has announced the line-up of its latest Year’s Best Australian Fantasy and Horror — 28 stories from 2014, curated again by Talie Helene and Liz Grzyb, to wrap your eyes around and fire your imagination. Or something like that.

I’m thrilled and giddily surprised to find ‘The Preservation Society’, originally published in the first issue of Dimension6, among the selections. Vampires in Cairns, an exploration into one of the minor characters in my novel Blood and Dust. Hell yes, I’m chuffed.

There’s some great reading in this volume — I’m particularly pleased to see ‘Shedding Skin‘ by Angie Rega in this line-up, one of those yarns that ticked all my boxes. The collection is due out in late October — OOH, HALLOWEEN! — but can be pre-ordered right now.

Ticonderoga Publications has released the table of contents for The Year’s Best Australian Fantasy and Horror Vol 3 (2012), edited by Liz Grzyb and Talie Helene, and I’m stoked to say that my ‘The Last Boat to Eden’, published in the recent Shadows award-winning Surviving the End, has been included.

The ‘best of’ series is a wonderful snapshot of Aussie horror and fantasy. It is due to arrive in July, and is available for pre-order.

Sure, I’m biased, but these two titles offer very fine tastes of Australian speculative fiction, and I’m quite proud to be in both of them.

A gorgeous cover and a splendid table of contests, a real feast of Aussie writers working in fantasy and horror: and me! I am so thrilled that ‘Wraiths’, from Winds of Change, made the fantasy list of Ticonderoga’s Year’s Best Australian Fantasy and Horror 2011 (now available to order), edited by Talie Helene and Liz Grzyb. Well done, all; what splendid company to be keeping — my wife included: here, look for yourself!

Despair is too strong a word. It’s not as if I’ve been confined to a sailing shop in the ravaging grip of typhus, or stationed in a hovel with kerosene water to drink and nothing to fight but mosquitoes and each other. Still, after a day of too much sun and not enough coffee, the sight of my car vanishing behind us as the last transport of the day trundles out of the Point Nepean National Park is morale destroying. The thought of trudging 2km from the next stop to collect the vehicle is not high on my list of favourite things to do. Fortunately, a gentleman in our transporter cab overhears my plight and offers a lift from the information centre to collect my wheels: only a thermos could’ve been greeted with more effusiveness. For future reference: when the tractor stops at the road gate at Gunners Cottage, dismount and look lively about it.

Friday was Remembrance Day, and by fortunate happenstance I was at the Point Nepean National Park where war and sacrifice are enshrined in concrete. Despite our end-of-day setback with the transporter stop, the park is well worth the visit. No more than 90 minutes drive from Melbourne, there are several areas of historical interest inside the park, which occupies the toe of Victoria’s Mornington Peninsula. A self-guided tour is available and the mp3 audio tour is highly recommended — the historical broadcasts and first-person recollections more than outweigh the very occasional naffness.

About 50 buildings are set out around the former quarantine station, also used as a military training camp and, most recently, home to Kosovar refugees. Many of the buildings are closed to the public, but a couple have been turned into interpretative displays. The most striking is the fumigation building, where belongings were treated on arrival in massive steam boilers. Many of the buildings have been re-purposed over the years, but this one retains its original fittings, right down to the tram tracks that ferried the goods in. The quarantine area brings to life tales of disease and yellow flag ships, burials and resumptions, leprosy and typhus.

The cottage itself is devoted to ecology and junior ranger programs, but a short walk through the striking Moonah woodlands is the old livestock jetty and a view of Port Phillip Bay, and farther west, the cemetery, where some 300 lay interred, most without headstones. Those monuments that remain include several from the tragic diseased ship Ticonderoga. Gunners Cottage is the farthermost point to which you can drive; after this, you’re on Shanks pony to the other points of interest (or, you can hire a bicycle or buy a ticket for the people-moving tractor-pulled transporter). The Coles Track cuts through the scrub to Cheviot Hill. 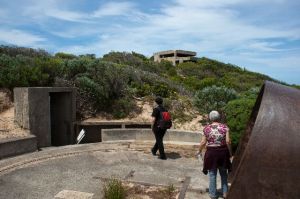 The hill is the highest point in the park and retains several gunnery posts looking out to sea. Two searchlight shelters are located closer to the beach. The beach was the site of the wreck of the Cheviot, and also the disappearance of Prime Minister Harold Holt. One look at the rocks and waves and it’s no surprise that someone could drown there.

Serious entrenchments here for naval guns, and a barracks on the landward side reduced to foundations. A highlight was an echidna nosing around the walls, apparently feasting on the black ants. 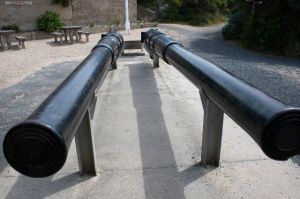 The centrepiece of the area’s fortifications, from which Australia’s first shots of both World War I and II were fired, to stop vessels from leaving after the declaration of war. This is an amazing set of buildings, wonderfully lit and illustrated with placards and recorded information including sound effects. The first we heard on our visit was a person whistling from somewhere in the depths …

The buildings reach down several floors inside the earth. It’s hard to imagine the tension in there as men worked to lift munitions from the depths to the cannons above. There remains the workings of a ‘disappearing gun’ and two of the long range six-inchers. The engineering shed still smells of diesel.

Alongside the road at one point is a rifle range, but it’s just one of several. Signs still warn of unexploded bombs in the scrub due to the army days. The other ranges, and also the Monash Light, a shipping beacon named after the Australian general, can be accessed via a walking track.

The buildings are stark, sombre reminders of not only Australia’s military history, but its foreign affairs and social evolution, with fortifications marking the fears of the populace and attitudes to the world wars. Information about the basic living conditions for servicemen and women also gives pause for thought.

Drinking fountains are placed only at Gunners Cottage and the quarantine station, and there are no food outlets inside the park. Toilets are available at Fort Nepean, Gunners Cottage and the quarantine station. Tractor tickets can be bought only at the information centre – one-way or returns. We spent from 10.30am till 4.30pm at the park and didn’t quite see everything; those entering by foot or bicycle can stay after the road gates are closed. The transporter makes its last run from Fort Nepean at 4.30pm.

Ticonderoga Publications have opened for submissions to their next year’s best of Australian and New Zealand fantasy and horror. Stories published this year are eligible; deadline to sub is January 20.

Anywhere But Earth, Coeur de Lion’s science fiction anthology in which I’ve gone all godbothering vampire conquistador, is launching at a spec fic fest in Sydney in November — sad to miss that. The day includes an opportunity to pitch to ‘an industry professional’.

And there’s more about the e-format for Aurealis at the Aurealis website. Looks as if my Aussie werewolf yarn will be available in the Feb or March issue, which is, I believe, still going to be free to download.

Oh, oh: Louise Cusack is returning to the world of MS assessments — briefly. Catch her while you can; she gives great feedback.

It’s great to see that someone has risen to fill the gap (almost) left by Brimstone (horror and dark fantasy) and MirrorDanse (science fiction and fantasy) no longer compiling a year’s ‘best of’ of Australian spec fic. Awards listings have been the best guide to quality Aussie writing in their absence.

But Ticonderoga Publications is releasing a best of: fantasy and horror published in 2010, edited by Talie Helene and Liz Grzyb. It’s the first of an ongoing annual snapshot. The contents have already been released, and now, the recommended reading list. What a superb springboard into an exploration of flights of fancy from Australian pens!

Ticonderoga has announced that its mammoth collection of Australian vampire stories, Dead Red Heart (including my rural gothic yarn ‘Children of the Cane’), is now available to pre-order online. It is due to hit shelves in April-May. It will also be available through online bookstores including Amazon.

I noticed that the forthcoming paranormal romance anthology, More Scary Kisses (with my first published foray into erotica, ‘Resurrection in Red’), also due out in April-May, is also available to pre-order. This is the first time that Kirstyn and I have had stories in the same original anthology — hers is much creepier! 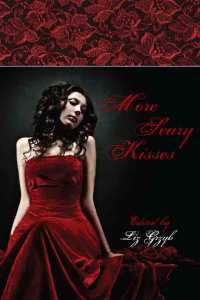 Here is the cover of More Scary Kisses, Ticonderoga’s anthology of paranormal romance stories due out in April. The table of contents is here.

And Ticonderoga’s Australian-themed vampire anthology, Dead Red Heart, has had its table of contents announced, and it’s a monster: 32 yarns, more than 130,000 words, due out towards the end of April.

I hope this means both will hit the shelf in time for Swancon, Perth’s annual spec fic convention which this year is also the national science fiction convention.

It’s particularly exciting to have a couple of stories coming out this year after such a long hiatus.

There’s also a story of mine, a cyberpunk one just in contrast to the New Orleans hot-and-sweaty of MSK and cane-and-dust vampire action of DRH, in Fablecroft’s forthcoming After the Rain anthology, also due out in time for Swancon. A special e-edition of ATR is available with proceeds going to the Queensland flood appeal. More than $1200 has been raised so far. Awesome!

For me, after the rain should probably be after the drought, it’s been so long since I’ve written a short story. But last year, after much kicking around and failing to succeed with novel-length manuscripts, my subconscious apparently found a window for some short stuff. Dark Prints Press’s Surviving the End anthology started the ball rolling — that book’s due out in 2012, and I quite like the story of mine in it: a dirty, post-apocalyptic Australian Gulf-country yarn.

I’m back in drought mode, now, but it sure feels affirming to have been able to dredge out some yarns!

Ticonderoga has announced the Table of Contents for More Scary Kisses, and yup, I’m smilin’. I wrote this yarn under a different title at the urging of a pal tired of not seeing any words appearing — I owe a debt of gratitude! And to editor Liz, for helping to break the drought… more to come!

Vampires in the Sunburnt Country
Blog at WordPress.com.
Loading Comments...