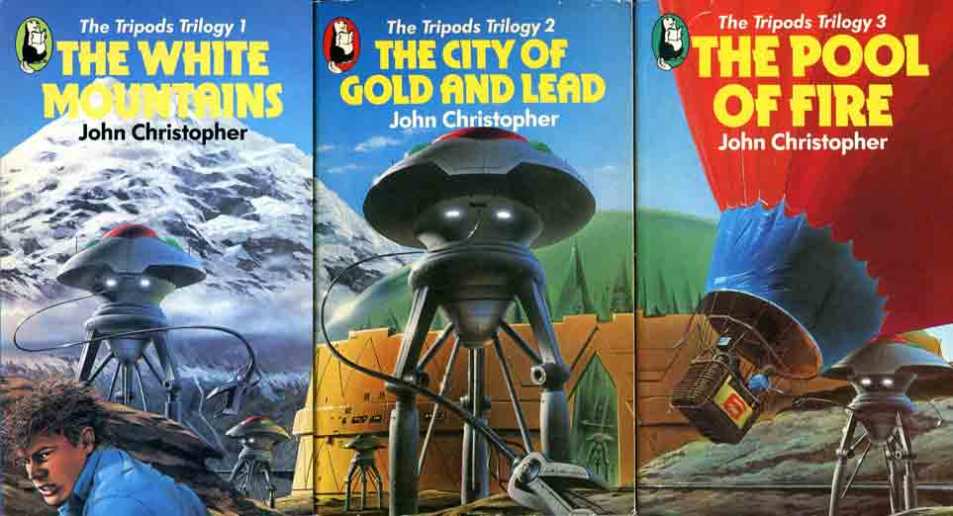 Word is spreading of a sad loss in the speculative fiction community, that of British Writer Samuel Youd, on February 3, only two months shy of his 90th birthday. <Update: Locus has confirmed Youd’s passsing.>

As John Christopher, Youd provided two of the great texts of my childhood, both of which have survived the recent pogroms of excess literature cluttering the household shelves: The Tripods and The Sword of the Spirits trilogies. Tripods in particular made a strong impression.

This is barely scratching the surface of his output published under numerous pseudonyms.

He ranked up there with the likes of Garner, Cooper and Le Guin in my early reading. I hope more generations come to appreciate his legacy.

Update: the Guardian looks at Youd’s work and provides a short obituary and a longer one.

There’s an axiom in the writing fraternity: Kill your darlings. It might have started with Faulkner or Twain or someone else entirely, but it’s a splendid piece of advice. It’s about not being precious, about letting the text be true to itself and keeping the author’s ego and cleverness the hell out of it. It’s about trimming the fat.

I killed a darling last night. It was the original scene that inspired a short story. It took four days, on and off, to realise it had to go. Four days of staring at a two-thirds finished yarn and wondering how it should end — who was doing what, how should they get what they wanted, who was stopping them, what did it all mean? And the final answer, delivered after numerous endings (amounting to more than 1500 words) had been written and discarded, was that the story had become bigger than that original scene. The pretty prose, the atmosphere, the spiffy dialogue: all surplus to requirements. Gone (or, at least, I confess, some tucked away in the glory box for a possible outing in another, more appropriate story).

And doesn’t it feel good? A bit like dieting like crazy (but, you know, healthily) and finally being able to fit *that* set of clothes.

Funny old game, this writing biz. After not having so much as looked at writing a short story in a couple of years, I’ve knocked over three in the past month with five or six others making wee blots on the drawing board. The first came after a day spent bleeding words over something else: 6000 thousand words downloading in a glorious rush in one day, needing not much more than some tinkering and polishing to reach a state I was happy with. Still haven’t got back to the abandoned idea, and maybe I never will. And since then, two more, squeezed with all the ease and joy of shitting razor blades: a thousand words excised from the overblown second (and I’m still not totally convinced it’s done) and this pesky third one still needing a damn good bit of work to make it shiny. But it’s there — I know how it ends (I’m fairly certain). It makes sense (I think). I’ve got you now, you bastard (I think).

It’s a joyful thing, isn’t it, to take that bare idea — a line of dialogue, a character, a situation — and explore it, tease it out, find out just what it’s all about and if it’s really worth sharing. At least, it is when it’s flowing. Not so much when it’s treacle, an idea that just won’t condense into a usable form. I have pals who hate editing, they find it boring because they already know the story; this is fine, as long as they still do the editing. I enjoy the editing because, whether the story popped out near right or had to be teased and goaded and agonised over, I love watching the raw form take a shape that’s (hopefully) pleasing to the reader’s eye. Even if it means killing your darlings. And maybe, *especially* if it means killing your darlings.

While I’m banging on about short stories, some folks who can actually write the darn things *really* well are scoring some serious recognition. Check out:

Ticonderoga going large on collections: Lucy Sussex, Felicity Dowker, Sara Douglass and Lezli Robyn slated for future release, with collections from Angela Slatter (one of two from this awesome writer out this year — over-achiever!) and Kaaron Warren being launched in only a few weeks!

Twelfth Planet Press is adding to its enviable catalogue with a collection from Marianne de Pierres.

And Cat Sparks is due to see a hot collection of her shorts entitled The Bride Price on the shelf this year!

These are just some to arrive in my inbox recently; Australia is a hotbed of writing talent at the moment and there are small presses popping up all over the place championing those with the chops. Expect to see plenty of them taking a bow at Aussiecon, where not just collections, but a bunch of drool-worthy anthologies are also slated to be launched.

And now for the long stuff

And while I’m at it, I direct your attention to the Queensland Premier’s literary awards, where spec fic from the likes of Justine Larbalestier and Scott Westerfeld makes a big impression in the YA section, and my former workmate and all-round good guy Noel Mengel has been shortlisted in the emerging Queensland author section. w00t!

A bounce around the interwebs produced a lovely image of the cover of Trent Jamieson’s upcoming debut novel, Death Most Definite. It’s very pretty. The story sounds awesome, with its Pratchett undertones: a Reaper man trying to keep the lid on the restless dead when the boss goes missing. Given that Trent’s one of the best darn writers I know, I can’t wait to get my little paws on this read. The even better news is, there’s at least two more in the works for the same series. (Note to self: make more room on book shelf.) It should be out in time for September’s Worldcon in Melbourne — huzzah!

January 19, 2009, is the 200th anniversary of Edgar Allan Poe’s birth. And what a talent he was, with a life so tragic and twisted and mysterious even that continues to tantalise, as if his incredible oeuvre was not enough.

To find out more about dear old Edgar, check out this site which not only has an extensive bio, but most if not all of his works available to read online.

And while I’m lamenting lost talents, it’s worth a second moment of introspection for Vincent Price, who played so many roles based on Poe’s work and gave them a certain, haunted, insane, camp rendition.

Gentlemen, I owe you one.